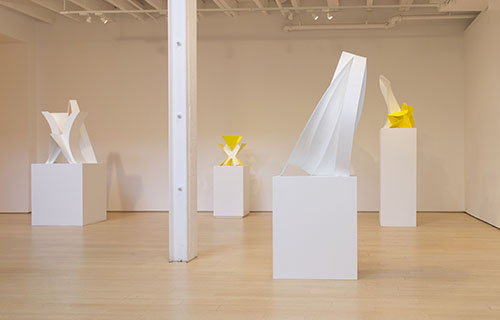 The exhibition George Sugarman: Painted Sculpture, at Loretta Howard Gallery, reveals the confidence of execution that comes from the artist’s decades-long exploration of the possibilities of modern abstract sculpture. These works in aluminum, from the late 1980s and early 1990s, illuminate many of the considerations and refinements of George Sugarman’s prolific career. He always sought to create forms that are elaborate and expansive, and deeply engaging.
Sugarman’s sculptures reveal themselves slowly, and reward the time spent in observation. A mix of symmetry and asymmetry continuously enlivens the experience of walking around them. You can enter and explore with your eyes, and also with your mind. The process of circumambulating the work allows you to imagine moving in and around and through the sculptures, and to see the play of light and shadow on the sweeping planes and curves.
George Sugarman was born in the Bronx in 1912, and from a young age he was interested in art and music. He graduated from New York City College in 1934, and took art classes at the Museum of Modern Art while working for the WPA and at other jobs. After serving in the Navy during World War II, he moved to Paris in 1951, on the G. I. Bill, where he studied briefly with the sculptor Ossip Zadkine. Sugarman soon decided he preferred sketching and traveling on his own, and toured around Europe, visiting museums and churches. He became particularly interested in Baroque architecture, as well as the work of Gaudi and Velasquez.
While in Paris, he met the American painter Al Held, and they reconnected when they both returned to New York. Sugarman joined the cooperative Brata Gallery in 1957—Held and Ronald Bladen were also members—and was one of the founders of the New Sculpture Group, a collective of sculptors who met weekly to discuss aspects of their work, and to plan exhibitions. During the 1950s and 60s, Sugarman built his sculptures with wood. By gluing, laminating and pegging pieces together, he was able to create a remarkable range of elaborate forms, both organic and geometric.
In much the same way as Brancusi made his pedestals into works of art, which supported the sculptures above both literally and metaphorically, Sugarman explored what the pedestal could bring to a sculpture. Two early works in wood— Bardana, 1962–63 and Ritual Place, 1964–65—quite literally (and, I think, wittily) seem to climb down off their pedestals and move out onto the floor. Some works of the sixties stood directly on the floor, and he built others that he installed on the wall, or the ceiling. In addition to his exploration of the place of sculpture, he is also credited with being the first modern sculptor to embrace color, and especially such vibrant hues. Sugarman constantly reimagined what our experience of sculpture might be.
Later in the 1960s, Sugarman became interested in making large sculptures that could be sited outdoors. His first major commission was the Saint Paul Sculpture Complex, in 1970. This exuberant, polychrome, multi-part sculpture hung down from the ceiling in the entrance atrium of a bank, and expanded outside the walls of the building into the space above the sidewalks and street. The variety of forms and colors gave the work a great sense of life and animation. Sugarman’s sculpture began to merge with installation, and architecture.
In this current show, Silent Welcome floats two white abstract shapes out in space, held up by a black curved volume attached to the wall. The black element is both pedestal and sculpture, and its curves echoes the curves and gestures in the flat white planes. Sugarman was a master of these multivalent webs of repeats and variations in his work. They relate in part to his life-long interest in music, and the idea of variations on a theme, the way that music can repeat a phrase but also change it, and how these repetitions and alterations can accumulate to enrich the work. Three Black Elements presents another set of variations, with familial relationships among the trio of forms.
Sugarman would often explore ideas by creating models with shapes cut from shirt cardboards, and the speed and flexibility of this method allowed him to sketch in three dimensions. The thin, lightweight aluminum sheet brings the spontaneity of his cardboard sketches to these finished sculptures. Sail, Flourish, and Gate have both the surprise of discovery that is the delight of sketching, as well as the confidence and elegance that come with many years of thoughtful work. Sugarman brought his lively and far-reaching imagination to all that he did, and it’s a pleasure to have the opportunity to see these sculptures, and to share his vision.