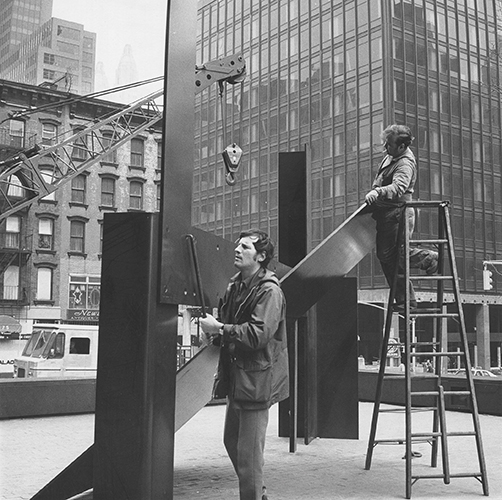 Note for the Royal Canadian Academy of Arts newsletter

While I was researching my first book, Large Scale: Fabricating Sculpture in the 1960s and 1970s, three or four artists caught my attention, in part by the absence of a monograph on their work. Of these, Robert Murray was the most interesting to me. I had known of him, and his work, my whole life; he had been part of the first group of artists to fabricate sculpture with my father at Lippincott, Inc., when the company opened in the mid-sixties. I reconnected with Bob while I was writing Large Scale, and after the book was published we gave several lectures together. When I visited his studio at his home in Pennsylvania and saw his archive of photographs documenting his work, I knew that these could be the basis of a comprehensive monograph. I spent about five years writing the book, while working full-time, and freelancing, as a book designer. I did most of my research in Murray’s studio, talking with him; reading books, catalogs and magazines; and looking at photographs. I also did research at the New York Public Library. Over the years we visited several museums and private collections to see his work.
In designing Robert Murray: Sculpture, I wanted to evoke the catalogs and art books of the 1960s and ’70s, the era when many of these sculptures were built and the modern public art movement flourished. The display type is Helvetica, itself an icon of modernism, and the book has an open and clean design, very much focused on the artwork. The plates section of the book draws on the artist’s photo archive, and shows his sculptures in his studio, during fabrication, at exhibitions, and in private collections, giving the reader an understanding of their actual size, and the chance to imagine experiencing the works in person. The texts provide an art historical framework for Murray’s life and work: the introduction gives a biographical overview, discussing his education and professional career; the interview allows the artist to speak directly about his thoughts on sculpture, his working practice, and his influences. The images in these two sections also provide context, showing friends and colleagues, fabricators, artwork and installations. 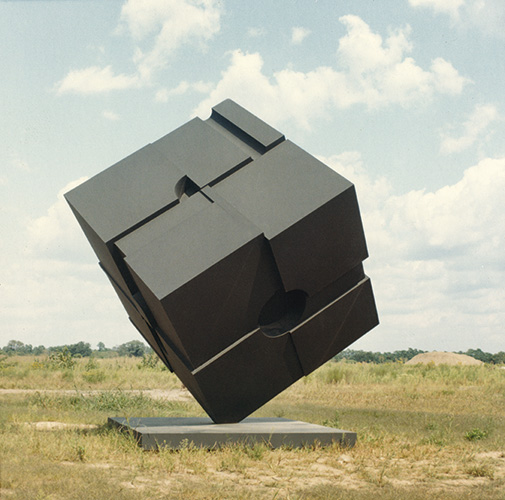 Tony Rosenthal’s Alamo, more familiarly known as The Cube, turns 50 years old this October. The sculpture arrived at Astor Place in 1967, as part of Sculpture in Environment. This show brought art out of the museum setting and into the public spaces around Manhattan, with large-scale sculptures installed all around the city, and gave New Yorkers their first look at the new work built at a public scale. The show included twenty-nine works by twenty-four sculptors, and was sponsored by the Office of Cultural Affairs, as part of the Cultural Showcase Festival. Doris Freedman is credited in the catalog with conceiving the show, and she went on to be a major promoter of public art in New York. She was the city’s first Director of Cultural Affairs, and founded the Public Art Fund. Sculpture in Environment followed the tremendously successful sculpture show, Primary Structures, held at the Jewish Museum in the spring of 1966, and the two exhibitions did a great deal to stir up excitement about the new sculpture of the era.
Sculpture in Environment was the first citywide exhibition of large-scale sculpture, and marked the start of a major public art movement. Over the next decade, Detroit, Newport, Cincinnati, Toronto, Grand Rapids, and many other cities hosted such exhibitions. These shows tied in with the attempts at urban renewal at that time, and were a way to get people to visit the cities and develop a greater feeling of connection and civic pride. They were also part of a very democratic ideal of making art available to everyone. With the founding of the National Endowment for the Arts in 1965, and the 1% for Art programs, that allotted one percent of the budget for new buildings go to purchasing artwork, there was an unprecedented amount of money available for commissioning and purchasing artwork.
While painting in the United States had made enormous strides in the 1940s and 50s, sculpture had largely lagged behind. The 1960s saw an efflorescence of new work, with artists embracing the techniques of industrial fabrication to create works that could hold their own in the urban environment. This led to a new kind of public art—no longer military figures on horseback, these shows introduced and promoted truly modern abstract public sculpture.
In addition to Rosenthal, artists the exhibition included Alexander Calder, Alexander Liberman, Robert Murray, Marisol, Louise Nevelson, Barnett Newman, George Rickey, Tony Smith, David Smith, and David von Schlegell. Each of these artists showed works made of metal. Others explored alternate materials: Stephen Antonakos and Chryssa both created sculptures that incorporated neon, shown at the NYU Loeb Student Center and Grand Central Terminal, respectively. Forrest Myers installed searchlights in the four corners of Tomkins Square Park—the beams met high overhead, creating a work of art truly at the scale of the skyscrapers of New York. 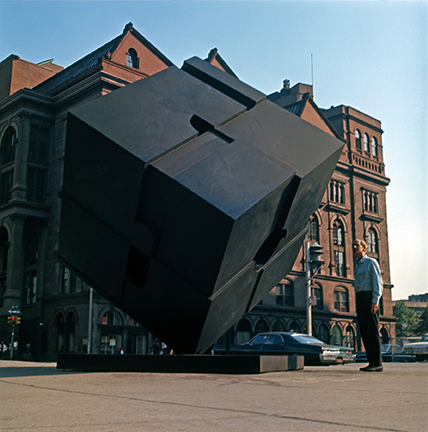 Only Alamo remains on the streets of the city today. At the conclusion of Sculpture in Environment, Rosenthal and the collector Susan Morse Hilles gave the sculpture to New York, and in the decades since it’s become one of the landmarks of Manhattan. Fifty years later, Alamo remains a rendez-vous point for locals and tourists alike. Walk through Astor Place any time of the day or night, and you’ll see someone trying to make the sculpture spin around. The aspirations of the artists and curators of Sculpture in Environment have been realized in the city’s embrace of this work of art. 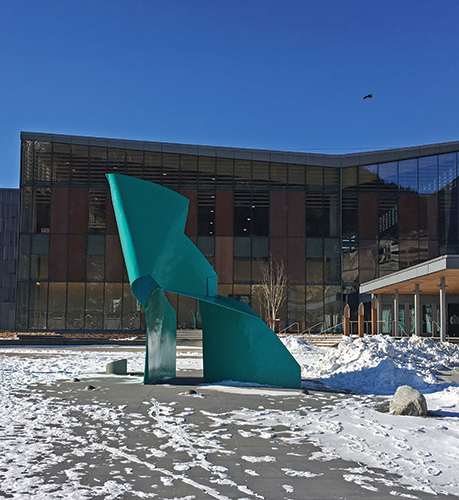 The Working Models: Sculpture by Robert Murray
at the Alaska State Museum in Juneau

On March 31, 2017, The Working Models: Sculpture by Robert Murray opened at the Alaska State Museum in Juneau. The show includes the working model and a selection of works on paper relating to the proposal and fabrication of Murray’s Nimbus, 1978. The exhibition also presents seven other small sculptures dating from 1969 to 2016; these working models are both finished works in their own right and also proposals for large-scale sculptures. Taken together, they offer an excellent overview of Murray’s prolific work over the last sixty years, and it was gratifying to see Nimbus recognized as an important partof the museum’s collection.
The working models, which number more than three-dozen, have been exhibited together in different groupings since 1983, when they were first presented at Phillips Exeter Academy. They have travelled to the Art Gallery of Greater Victoria, in British Columbia, the Centro Culturale Canadase, in Rome, and the Delaware Art Museum, among other venues. They provide the opportunity to consider a body of work that could not otherwise be brought together, given the challenges of moving and exhibiting large-scale sculptures.
This year marks the 40th anniversary of Nimbus’s commission, and the sculpture has had quite a complicated history. In 1977, the National Endowment for the Arts provided a matching grant to the Alaska State Council on the Arts and the Alaska Court System to commission a sculpture for a new state court building in Juneau. A committee made up of curators, local professionals, and the architect of the new courthouse assembled to select an artist, and they unanimously chose Robert Murray. Murray had been building large-scale sculptures for nearly twenty years, and had received commissions for outdoor public works in the United States and Canada. He visited Juneau several times, met with members of the community, and toured the area. Nimbus was installed in the spring of 1978.
In spite of such an auspicious start, opposition to began to build against the sculpture that fall, led by a few local politicians who flatly stated that they didn’t like modern art. After several contentious years, and despite a good deal of support for the sculpture, the politicians attached a rider calling for its removal to an otherwise popular bill, and Nimbus was de-installed in 1984.The NEA did nothing to protect the sculpture, and Nimbus languished in storage for the next six years. 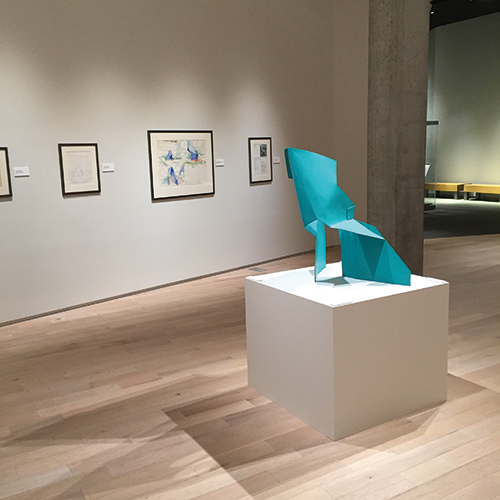 In 1990, Bruce Cato, then chief curator at the Alaska State Museum, arranged to acquire Nimbus as a significant historical artifact—Alaska’s most controversial work of art. Chief Justice Robert Boochever, one of the original supporters of the sculpture, and a group called Friends of Nimbus raised money for the new installation, and a dedication ceremony took place in June 1991.
Last summer, Nimbus was re-sited in a prominent location in front of the new museum building, the Father Andrew P. Kashevaroff State Library, Archives and Museum. Robert Banghart, former deputy director, worked directly with Robert Murray and Donald Lippincott, the fabricator of the sculpture, to repair the damage from the original de-installation, and the piece has been completely restored for its new location. The new building opened to the public on June 6, 2016, and the sculpture was, quite literally, at the center of these celebrations.